search: NO
home: NO
page: NO
front_page: NO
archive: NO
single: YES 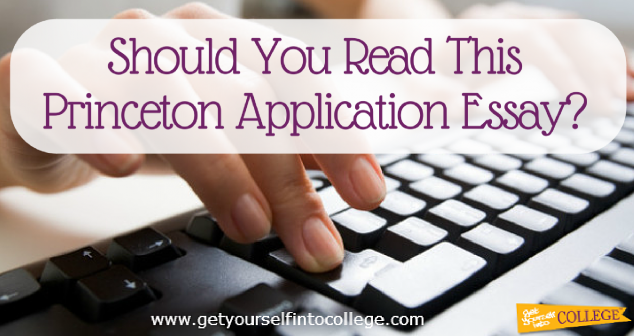 Should you read other students’ application essays? This is a question that comes up all the time, so today I want to share my response in relation to two students who applied to Princeton.

RISKS YOU NEED TO TAKE TO STAND OUT

Students who write the best application essays are the ones who take risks. They get the jitters–the nervousness and excitement–that we all experience when we put ourselves out on a limb, when we’re vulnerable and authentic and express ourselves in ways that might be different from our peers.

A few years ago, Ron Lieber published an article in the New York Times (“Standing Out From the Crowd”) and shared four application essays that have one thing in common: “an appetite for risk.” The students who wrote these essays “not only. . .talk[ed] openly about issues that are emotionally complex and often outright taboo, but they took brave and counterintuitive positions.”

One of my students who just graduated from Princeton wrote an extraordinary Common Application essay about a series of revelatory moments she experienced while studying, traveling, and volunteering abroad. Her poetic style and narrative structure were unique and risky.

She wasn’t trying to be different. Rather, the style and structure of her essay were intimately connected to her ways of thinking, seeing, and being.

THE PROBLEM WITH READING OTHER STUDENTS’ APPLICATION ESSAYS

But when she got deferred from Yale, she got nervous–far more nervous than before–and started sending me other essays to read.

They were all very good, but she was just trying to play it safe by writing something far less experimental and more like the ones her friends wrote.

I think the best advice I gave her was to not change her essay.

Yes, that original essay was unusual.  It was a one-of-a-kind application essay, and it was risky.  But it was so real–so memorable–so authentic–that I wanted her to stand by it. . .to stand for herself.

She took this advice, and more than one school got in touch with her to express how impressed they were with her essay.

(Just FYI, she wound up getting rejected from Yale and accepted at Brown, Princeton, Stanford, Columbia, and many other top-tier schools.)

Whenever I think of this particular student’s essay and the jitters she experienced, I’m reminded of what Ralph Waldo Emerson declared in “Self-Reliance”:

“When good is near you, when you have life in yourself, it is not by any known or accustomed way; you shall not discern the foot-prints of any other; you shall not see the face of man; you shall not hear any name;—— the way, the thought, the good, shall be wholly strange and new. It shall exclude example and experience.”

That “wholly strange and new” way you must take is exalting yet scary because, as Emerson also notes, in society, “the virtue in most request is conformity,” which loves “not realities and creators, but names and customs.”

What I’ve found is that when my students read those sample college application essays they often wind up feeling blocked and locked into the types of ideas they encounter in them.

You need to start with yourself, not others.

HOW TO READ THIS PRINCETON APPLICATION ESSAY

However, if you’re going to read sample essays, I want to introduce you to some useful strategies.

The fact of the matter is that great writers study the writing of others.  Even Emerson acknowledged this truth, but as he stated in “The American Scholar”:

“Books are the best of things, well used; abused, among the worst. What is the right use? What is the one end, which all means go to effect? They are for nothing but to inspire. I had better never see a book, than to be warped by its attraction clean out of my own orbit, and made a satellite instead of a system.”

Watch this video if you want to see her Princeton supplement, listen to me critique it, and give you tips on how you can use it to get your own creative juices flowing.

JUMP TO 1:50 IN THE VIDEO to get right to the critique and tips.

CLICK HERE if you want to read her Princeton application essay right now. You’ll also get a chance to see essays written for Hamilton, Antioch, and New York University.

My recommendation is to study the writer’s underlying techniques, structure, and style.

As I mention in the video, Shanti’s essay is in response to this Princeton supplemental essay topic:

“`Princeton in the Nation’s Service’ was the title of a speech given by Woodrow Wilson on the 150th anniversary of the University. It became the unofficial Princeton motto and was expanded in 2016 to `Princeton in the nation’s service and the service of humanity.’ Woodrow Wilson, Princeton Class of 1879, served on the faculty and was Princeton’s president from 1902–1910.”

One thing a lot of students forget is that Princeton asks you to use this theme “as a starting point” to “write about a person, event, or experience that helped you define one of your values or in some way changed how you approach the world.”

Now I want to show you a few ways you could put my recommendation into practice in relation to this Princeton application essay.

Princeton doesn’t have a “why us” type of supplemental essay, but Shanti found a way to integrate a recent quote from a Princeton Professor of Bioethics (that was published in the New York Times) about what types of organizations he makes donations to and why he doesn’t donate to Princeton. The paragraph ends with the professor’s call for the words of “Princeton in the service of all nations to be put into action.” What I like about Shanti’s approach is that she shows her awareness of a Princeton professor’s remarks about why he only gives money to institutions that “directly serve the poor, particularly those in `faraway places.'” As a college student, you’re going to need to write essays in which you situate your own ideas within the context of other people’s ideas, so this technique she uses is a good example of how you can subtly indicate that you’re ready to engage in this type of informed discussion.

Of course, you don’t have to use this technique. You have to decide if it works in the context of your own essay topic.

The second thing I want you to notice is how she makes transitions between the parts of her supplemental essay. In the third paragraph, Shanti transitions away from the specific quotes in the Times article by describing the scene in which she was reading it and how it caused her to reflect on Princeton. I like this transition because she doesn’t jump right into her own values. This paragraph reveals to admissions officers that she’s someone who engages in extended contemplations of what she reads. Of course, this is exactly what you’re going to need to do in order to excel in college.

So if you’re reading sample application essays check out how the writers handle transitions. Do you like their approach? If so, think about how you could use a similar technique in your own essay.

The third thing I want you notice about Shanti’s essay is how she creates paragraphs of varying lengths. In traditional academic essays, you usually want to avoid one-sentence paragraphs, but when you’re writing a personal narrative (especially a college application essay) short paragraphs can effectively call attention to key points that you want to pop. Remember that admissions officers are reading so many essays, and you want to do everything possible to make reading yours pleasurable and easy to read. If someone sees a bunch of really long paragraphs, they’re going to feel overwhelmed.

These are just a few ways you can read other people’s application essays (or personal narratives) in a way that stimulates your own thinking and helps you avoid feeling intimidated.

CLICK HERE to learn more about my one-hour consultations.